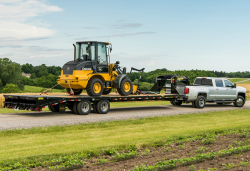 The front gas tank in some 2016-2018 General Motors HD trucks is overfilling, rupturing, and leaking fuel. The affected trucks all have two gas tanks. The front tank requests fuel from the backup when running low, but a defective sensor is requesting more fuel than the tank can hold. GM is recalling the trucks to stop the front tank from over-filling and rubbing against the driveshaft.

GM previously recalled 2011-2015 trucks for the same problem but said there was no evidence to suggest the problem existed in later model years. Whoops.