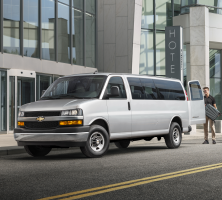 GM is urging owners of the 2021 Savana to park outside and away from anything that could burn until the vans get repaired. Late last year they said the van's batteries could drain when the positive battery cable accidently came in contact with the fuse block assembly. Now they're saying it's less drain, more flame—as in at least four vans have gone up in smoke due to the batteries short-circuiting.